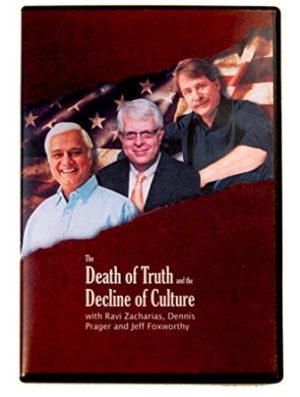 The Death of Truth and the Decline of Culture with Ravi Zacharias, Dennis Prager and Jeff Foxworthy

Is America a moral nation? Can our culture survive if we replace right and wrong with political correctness? The Death of Truth and the Decline of Culture with Ravi Zacharias, Dennis Prager and well-known comedian Jeff Foxworthy uses comedy, poetic insight and solid biblical morality to fuel an intriguing and entertaining discussion of these important questions.

Dennis Prager is a nationally syndicated radio talk show host, columnist and best-selling author. He has lectured on six continents, taught at many colleges and has appeared on television news shows.

Jeff Foxworthy hosts The American Bible Challenge in GSN. More importantly, he is a Christian who serves beyond the world of comedy.