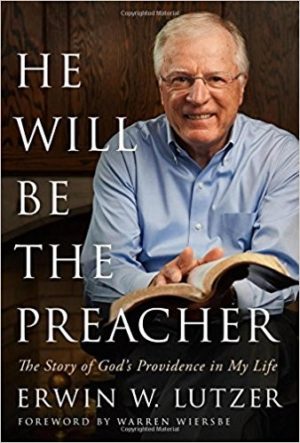 He Will Be the Preacher: The Story of God’s Providence in My Life

“He will be the preacher.” Whether this was just an offhand remark or the woman leaning over his crib was speaking under inspiration from the Holy Spirit, either way, her prediction came to pass.

This is the story of a shy, wisecrack kid from rural Canada becoming a well-known American preacher. It’s a story of seemingly random events deciding one man’s destiny. But most of all, it’s a story of God leading one of His dear children along.

Join Erwin Lutzer on this tour of his life—from a Saskatchewan farm to a Dallas seminary to the historic Moody Church in Chicago. Hear his personal reflections and tales of pastoral hardship. Meet the people who have shaped him: his parents, professors, family, and even the great evangelist Billy Graham. And see how his many roles—author, speaker, evangelist, historian, and cultural critic—have carried his prophetic voice beyond Moody’s pulpit, even abroad.

Part story and part reflection, full of heart with a dose of wit, He Will Be the Preacher is a personal and engaging witness to the providence of God.