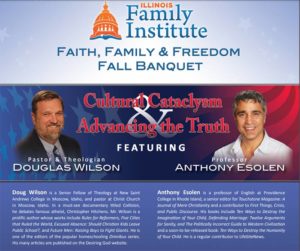 Doug Wilson is a Senior Fellow of Theology at New Saint Andrews College in Moscow, Idaho, and pastor at Christ Church in Moscow, Idaho. In a must-see documentary titled Collision, he debates famous atheist, Christopher Hitchens. Mr. Wilson is a prolific author whose works include Rules for Reformers, Five Cities that Ruled the World, Excused Absence: Should Christian Kids Leave Public School?, and Future Men: Raising Boys to Fight Giants. He is one of the editors of the popular homeschooling Omnibus series. His many articles are published on the Desiring God website.

Anthony Esolen is a professor of English at Providence College in Rhode Island, a senior editor for Touchstone Magazine: A Journal of Mere Christianity and a contributor to First Things, Crisis, and Public Discourse. His books include Ten Ways to Destroy the Imagination of Your Child, Defending Marriage: Twelve Arguments for Sanity, and The Politically Incorrect Guide to Western Civilization and a soon-to-be-released book: Ten Ways to Destroy the Humanity of Your Child. He is a regular contributor to LifeSiteNews.